Showing posts from January, 2017
Show All

Systemic racism behind South Africa’s failure to transform its economy

South Africa suffers from high levels of poverty, racism and inequality. This can be almost entirely attributed to centuries of conflict between white settlers and indigenous Africans. Apartheid reduced black Africans to the periphery of the economy. Many were condemned to landlessness and poverty. The country’s post apartheid government attempted to dismantle this inheritance by adopting a  strategy  of black economic empowerment. It passed a series of laws designed to redress historical economic inequalities. These include the Employment Equity  Act  and the Broad-Based Black Economic Empowerment  Act  (B-BBEE). But years after their implementation, these policies largely remain  failures . For instance, in 2016 whites still constituted  68.9%  of top management in all sectors. Yet they are only  9.9%  of the economically active population. In contrast black Africans, who constitute 78% of the economically active population, hold only  14.3% of top management positions. Em
Post a Comment
Read more

Moroccan women walking in capital Rabat.  EPA/STR Moroccan authorities have recently banned the manufacturing, marketing and sale of the burqa – an outer garment worn by some Muslim women to cover themselves in public. It completely conceals the face, with a mesh cloth shielding the eyes from view. The decision is noteworthy in a country whose population is  99% Muslim . So what does the ban mean? The Moroccan Ministry of Interior  cited  security concerns as the reason for the ban. It argued that wearing the burqa could help criminals and terrorists hide their identities. Indeed, several criminals have  reportedly used the burqa or niqab – a veil that covers the face but not the eyes – to perpetrate crimes, including theft. But beyond immediate security concerns, the real worry for the moderate Moroccan government is the spread of radical,  Salafist  Islam. Salafism  has been linked  to ISIS and terrorism in North Africa. Morocco’s concern with terrorism is exacerbated by t
Post a Comment
Read more

Trump to Ban 2-year Visa for Nigerians Entering US

US President, Donald Trump’s executive order may affect Nigeria’s two-year visa validity entry into America if President Muhammadu Buhari-led federal government failed to take proactive measures. According to a recent analysis on the Trump’s executive order, Nigerians will no longer be issued with American entry visas which have two-year validity. The online medium said Nigerians who hold dual nationality will be affected if their other passport is from Syria, Iraq, Iran, Sudan, Libya, Somalia and Yemen – the seven Muslim-majority countries “of concern”. Analysis shows that at least two clauses of the Executive order will affect Nigerians directly. Section 9 of the Executive Order states: “The Secretary of State shall review all non-immigrant visa reciprocity agreements to ensure that they are, with respect to each visa classification, truly reciprocal insofar as practicable with respect to validity period and fees, as required by sections 221(c) and 281 of the INA, 8 U.
Post a Comment
Read more

The Senate Minority Leader, Godswill Akpabio, has disassociated himself from the plan by foremost Nigerian singer, 2Baba, also known as 2Face, to stage a protest on February 5 against the federal government. The internet has been flooded with reports that Mr. Akpabio, who is a former governor of Akwa Ibom state, was sponsoring the planned protest. The senator, through a statement issued by his spokesman, Anietie Ekong, said it was laughable that people could try to link him with the planned protest because of the Prado SUV he donated in 2013 as a wedding gift to the singer and his wife, Annie Macaulay who is from Akwa Ibom. “For the avoidance of doubt, we wish to state categorically that Senator Akpabio knows nothing about the planned protest neither is he the sponsor,” said the statement which added that Mr. Akpabio “has had no contact whatsoever with 2Face for many years”. The statement continued: “According to the information being circulated the organizers of the p
Post a Comment
Read more 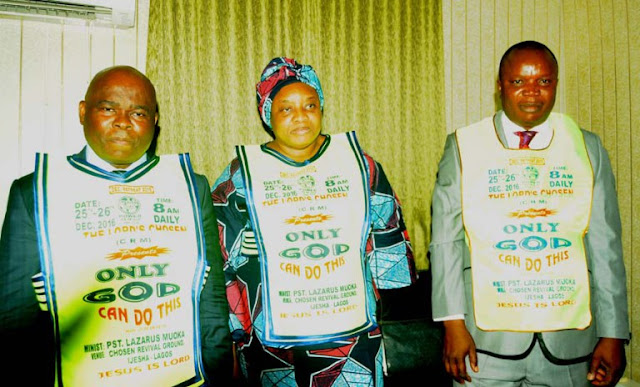 A Lord’s Chosen pastor is begging for her freedom after she was thrown into prison for saying that a wealthy philanthropist got his money through diabolic means. The female pastor of the Lord’s Chosen church is said to be spending time in jail A female pastor with the Lord’s Chosen church in Rivers state is languishing in prison after she allegedly accused a popular businessman and wealthy philanthropist of being a ritualist. Here is how Views Naija narrated the story as it happened: ************** When Pastor David Ibiyeomie of salvation ministries said that in ogoni someone can actually make one mad with just #500 many people did not understand, but the man of God actually knew what he was saying! A local community in Gokana Local Government Area of Rivers State Baranyonwa Dere popular known as B.dere has been thrown into turnmoil and confusion when a popular member of the salvation ministries and self acclaimed philanthropist Mr Lesi Maol was accused of
Post a Comment
Read more

Earlier, we reported about Uyo based Danish humanitarian, Anja Ringgren Lovén, who shared cute new photo of an adopted boy, Hope who abandoned by his family in Akwa Ibom State, for being a ‘witch'( in case you missed it ). Now, controversial media personality, Freeze, has come out to slam the Redeemed Church.. Sharing the photo above, he wrote; Redeemed was busy setting up churches on every street, yet they missed this boy…..  I bet with you, that there was a Redeemed church within walking distance from this starving child, branded a witch by the same doltish belief system that extorts your first salary every January, having you willingly give your hard earned money in a recession, to a church where the G.O has a private jet and leads a life of sheer opulence! The Nigerian Pentecostal church brands people wearing tattoos as bad and ‘unchristian’ whereas this woman with all her tattoos is more Christ like than all your ‘Daddy GOs’ can ever be. What she is doing is all Jesu
Post a Comment
Read more 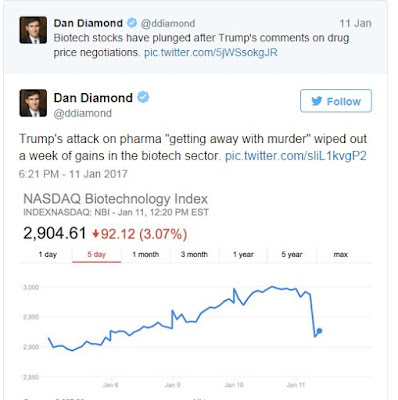 Adding to a growing list of White House meetings with corporate executives, President Donald Trump held talks Tuesday with the leaders of pharmaceutical companies, in an effort to push them to lower the prices of their products. In return, he pledged to speed up federal approval for new drugs. “The U.S. drug companies have produced extraordinary results for our country but the pricing has been astronomical for our country—we’ve got to do better,” Trump  said at a Tuesday morning press conference . “We’re also going to be streamlining the process so that from your standpoint, when you have a drug, you can actually get it approved if it works instead of waiting for many, many years.” The CEOs present represented Eli Lilly and Company, Johnson & Johnson, Merck & Co. Inc., Amgen Inc., Novartis AG and Celgene Corp., while a top lobbying group for the sector, Pharmaceutical Research and Manufacturers of America, was also present, Reuters  reported . In the press conference th
Post a Comment
Read more

Big Brother Nigeria introduced two new housemates to the show today making 14 housemates on the Big Brother Naija 2017 See Gobbe show. Meet the new housemates: DEBIE-RISE: the 13th housemate, entered the Big Brother House tonight with a bang – babe faked a faint that really scared the former housemates. A self-professed tomboy. It’s clear that she’s always been daddy’s little girl. Growing up she’d help him out often and loved playing sports and staying active. He’s an electrical engineer and she studied Computer Science. Many will remember her as the melanin goddess that came in second on Nigerian Idol. She speaks both Yoruba and Hausa and is still as active as she was when she was young. From football, to dancing, to Taekwondo she’s a bonafide fitness freak with big dreams to take Nollywood by storm. BASSEY: comes from a large family but sadly lost his mom seven years ago, something he says was a huge low point in his life. He learnt to fend for
Post a Comment
Read more
More posts