Showing posts from September, 2018
Show All

Panic As 50 Million Facebook Accounts Are Hacked By Unknown Hackers 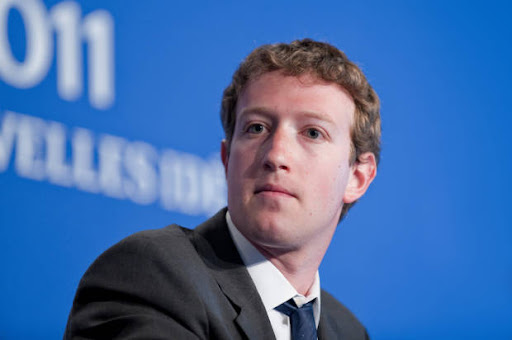 Hackers have attacked Facebook stealing data of about 50 million users following a security breach. Facebook founder, Mark Zuckerberg Facebook Inc (FB.O) said on Friday that hackers stole digital login codes allowing them to take over nearly 50 million user accounts in its worst security breach ever given the unprecedented level of potential access, adding to what has been a difficult year for the company’s reputation. Facebook, which has more than 2.2 billion monthly users, said it has yet to determine whether the attacker misused any accounts or stole private information. It also has not identified the attacker’s location or whether specific victims were targeted. Its initial review suggests the attack was broad in nature. Chief Executive Mark Zuckerberg described the incident as “really serious” in a conference call with reporters. His account was affected along with that of Chief Operating Officer Sheryl Sandberg, a spokeswoman said. 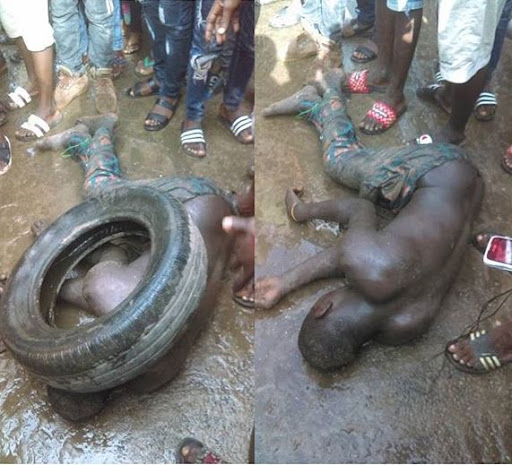 An angry mob has descended heavily on a Nigerian man beating him mercilessly after he tried snatching a baby alongside his gang members.

A suspected member of a 3-man gang that specialises in stealing babies, met his waterloo, today, at Showemimo bus stop, Ojo, Lagos State after his gang members attempted to snatch a baby from a woman, who they nearly strangled to death in the process.  It was gathered that their plan failed after passersby took notice of what was happening and intervened, nabbing one, while the two others escaped.  The suspect was subsequently subjected to jungle justice and was only saved from being set ablaze, by the timely intervention of the police. 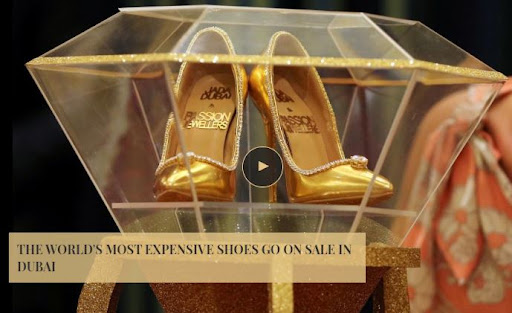 The most expense pair of shoes in the whole world has gone up for sale for an unbelievable price.


According to the makers, it took over nine months to design and create the pair of shoes. “Jada Dubai designs only shoes with diamonds. For the launch of our second collection, we wanted to create a piece that is truly unique in the world using very rare diamonds,” said Maria Majari, co-founder and creative director of Jada Dubai. World's most expensive shoes: Valued at $17 million, this unique pair of high heels made of gold, leather, silk and 236 diamonds is on display at the Burj Al Arab Hotel in Dubai pic.twitter.com/oLShevu0rh — AFP news agency (@AFP) September 27, 2018 Majari added that “there will be only one pair of The Passion Diamond Shoes in the world.
“We had to prototype many shoes in Italy in order to find the perfect shape, perfect heel, the perfect colour for it.
“Even inside, the logos of both companies are made out gold, which is very thin, so it will be very comfortab…
Post a comment
Read more 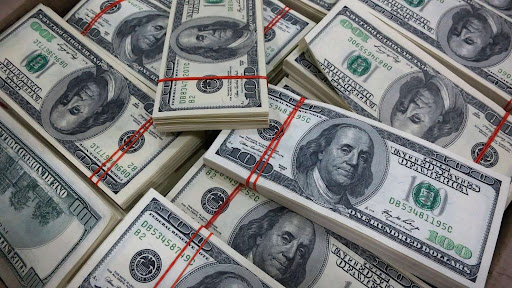 A bricklayer has reportedly stumbled upon $144,000 fake notes hidden inside an uncompleted building in Borno.

The Nigerian Security and Civil Defence Corps, Maiduguri Command, said it discovered counterfeit currencies, amounting to 144,000 US dollars in an uncompleted building at Shagari low-cost Housing Estate in Borno State. The Commandant of the Corps, Ibrahim Abdullahi, disclosed this in an interview with the News Agency of Nigeria, on Friday in Maiduguri.

Abdullahi said that one Bukar Goni, a 40-year-old bricklayer, found the counterfeit notes on September 16 this year, and reported to the command. According to him, the personnel of the command went to the building and discovered the fake notes. “Preliminary investigation by our personnel revealed that the notes have the same serial number.
“Also, some of Bureau-de- Change operators in the state, said they noticed the fake currency in circulation some months ago.
“We have put our men and other sister agencies on notice of the trend…
Post a comment
Read more 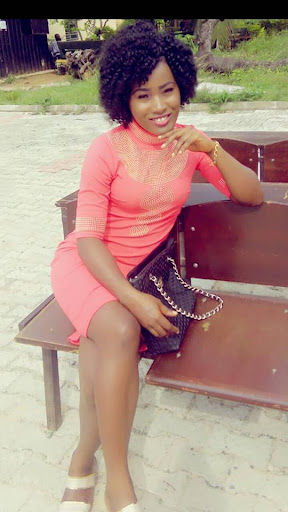 A man has been accused of killing his wife who was pregnant in another case of domestic violence that went wrong. The late Amarachi Emmanuela A woman, Amarachi Emmanuela has reportedly been beaten to death by her husband just 19-days after her wedding. The late woman's best friend, Sharon Joseph took to Facebook to mourn her revealing details of how she passed away.  According to her, late Amara who was pregnant was beaten to death by her husband in a shocking case of domestic violence.
'How can I explain that after 19days of marriage you died with your baby still in the womb as a result of domestic violence? Annunciation Convent most especially 2009 set will miss you,' she wrote.
FacebookTwitterEmailWhatsApp STAY UPDATED WITH infinityprods.blogspot.com
Contact: Infinity Productions
Call/whatsapp:+2348178672673
FOR YOUR
Event promotions
Advert Placements /Marketing/PublicityCOMMENT and SHARE
Post a comment
Read more

Serving Member Of The House Of Reps, Funke Adedoyin Is Dead 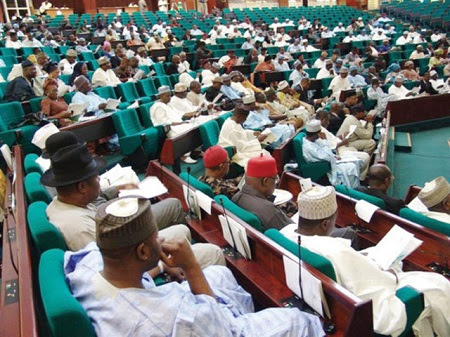 A serving member of the House of Representatives from Kwara state, Hon. Funke Adedoyin, has reportedly died.
Hon. Funke Adedoyin, a member of the House of Representatives, representing Irepodun/Isin Ekiti/Oke Ero constituency of Kwara state, has been reported dead. According to a Daily Trust report, it was gathered that the Peoples Democratic Party (PDP) lawmaker died while treating an ailment suspected to be cancer. The death, which reportedly occurred on Friday, was not yet announced by the family as it was being kept away from her aged father. A source close to the family said that the deceased had a cancer operation about two years ago, while she had been in and out of the country for medical attention since then. The source, who said a call was put across to the deceased last week, added that he suspected something was missing when she did not pick or return the call.
FacebookTwitterEmailWhatsApp STAY UPDATED WITH infinityprods.blogspot.com
Contact: Infinity Productions
Call/what…
Post a comment
Read more 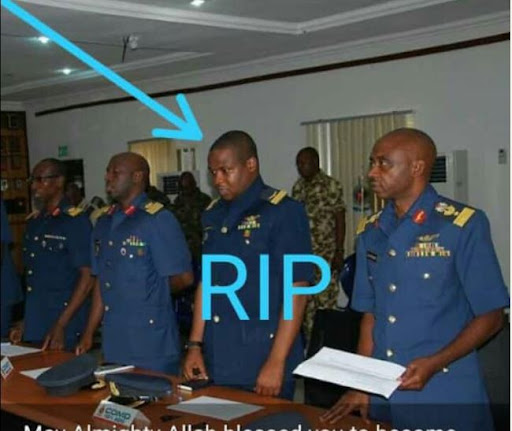 The face of the Nigerian pilot who died in the ill-fated crash in Abuja today has been unveiled as the country grieves.

Squardron Leader Babaari (highlighted) Two F-7 aircrafts crashed this morning when they were practicing for the October 1st Independence day. Two F-7 pilots namely Flt. Lieutenant Ambi and Flt. Lieutenant Abutuba survived because they managed to eject before the aircraft went down. Unfortunately Squardron Leader Babaari died in the crash. Reports have it that he was such a dedicated and selfless pilot who was committed to his work. See more images: 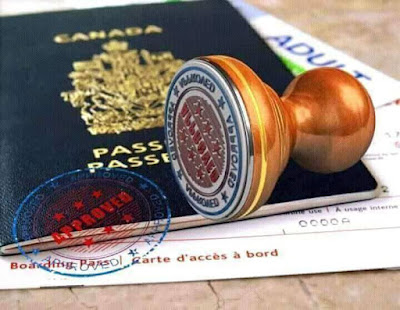 Are you Tired of paying exhorbitant money to Travel Agents,or are you tired of being denied Visa,have you been denied Visa before, do you want to Travel Abroad for your Business,visit,tour or want to start a new life abroad,ARIL TRAVELS AND TOUR travel agency is here for you .ARIL TRAVELS AND TOUR  have very Affordable and Comfortable payment plan to help you perfect your Traveling documents including Account boosting , even with your initial deposit ,  ARIL TRAVELS AND TOUR will finish your documents , Afterwards you pay the balance .Office Address :HEAD OFFICE :KM 42 Lekki-EPE express way,Olokonla b/stop, beside whisky ice loungeAjah lekki, Lagos.NigeriaBranch Office :25 Plymouth road ,Benin city Edo state.NigeriaBranch Office :Nò2 Peace Crescent,Omachi road along Rumuodumaya,Port Harcourt.NigeriaContact Number :Call or Whatsapp : 08124897424Call : 08156123091

My Wife And I Didn't Date, We Just Got Married - Comedian Akpororo 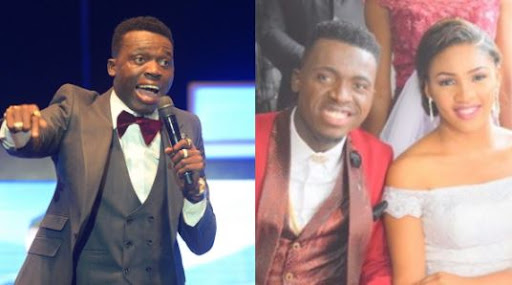 Akpororo's marriage to Josephine has been progressing with kids in between them in the last couple of years.
Akpororo and Josephine Nigerian comedian Akpororo, has revealed that he didn't date his beautiful wife, Josephine, who he walked down the aisle with in 2015.  According to the comedian, he knew his wife since she was part of a dance group and shortly after they began to exchange pleasantries, they got married. Akpororo who admitted that Nigerian comedians seemed to always go for beautiful women in the interview with Saturday Beats, however, said it was just a coincidence.
“I did not date my wife. We are in the same industry and she was with Explicit Dance Group. We had met on some occasions and greeted each other. We never had any period to date; I would say we started dating after we got married. Although I am a comedian, when I approached her, she took my words seriously because whenever I am serious you would easily know." he explained.
FacebookTwitterEmailWhatsAp…
Post a comment
Read more
More posts